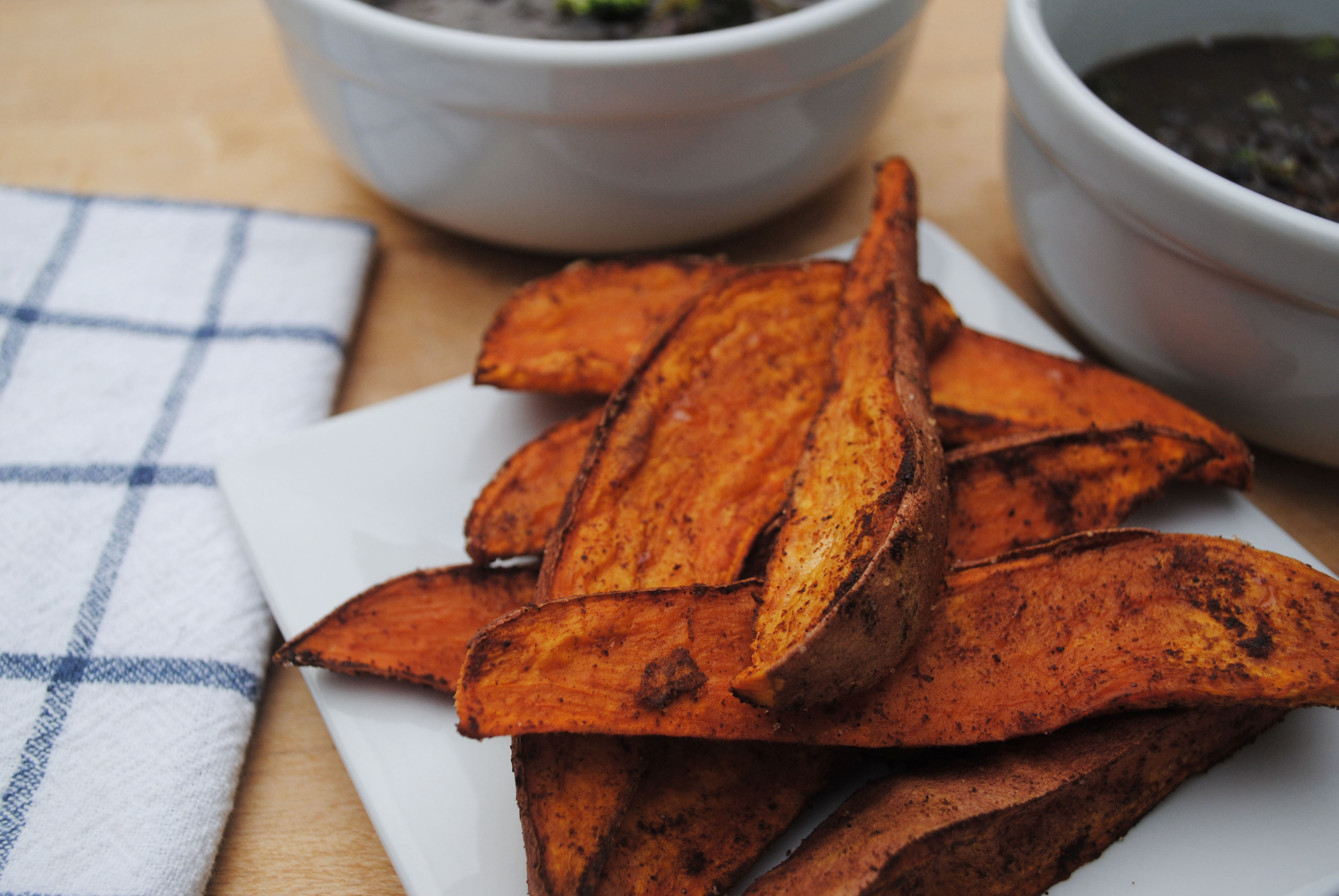 Roasted sweet potato wedges are a quick, easy side dish that often show up in our house on veggie burger night, or TLT sandwich night, or black bean soup night… The list goes on. The wedges of sweet potato take all of 3 minutes to prep, roast in less than 30 minutes, and are somewhat forgiving if the rest of your dinner timing doesn’t line up quite right (they can hang out in the oven for a while after you turn it off). They are that perfect add-on to any meal that doesn’t seem like quite enough on its own (like soup leftovers from earlier in the week), and leftover wedges crisp up nicely in the toaster oven for lunch the next day. Because sweet potatoes keep in the cupboard for a week or two, I usually buy a couple extra at the store so that I always have one on hand to fill the gap. So far, the little guy seems to always reserve some shelf space in his belly for sweet potatoes.

After tossing the wedges with a touch of olive oil, I like to play with the spice blend used to season the potatoes. You can never go wrong with good old salt and pepper, but try experimenting with salt plus one or two other spices to have some fun and keep it fresh. With a simple black bean soup the other night, I started with salt, added cinnamon to complement the sweetness of the potato, and chili powder to pair with the flavors of the black bean soup. Plus, the combination of sweet potato and spices feels like a real treat even while loading your system with all kinds of goodness.

Other spices to explore include cumin, garlic powder, paprika, and hot pepper flakes.

Sweet potato: A wonderfully healthy addition to any meal, sweet potatoes are also one of the best bang-for-your-buck choices, as they are nutrient-rich, filling, and relatively inexpensive. Adding sweet potatoes to your meal gives you a great dose of carotenoids, beta carotene, vitamin A, C, D, iron and magnesium. Get this, they may even have a unique anti-cancer protein.

Cinnamon: Seek out Ceylon cinnamon, which is the true cinnamon, and you’ll benefit from its hearty levels of anti-oxidants. Cinnamon is anti-microbial, fights inflammation and supports your immune system.